Grab my Button! Ooh how naughty!

Read My Rants by Email

This past Sunday I participated in the Patchwork Indie Arts & Crafts Festival here in Long Beach. It's been quite a while and 3000 miles since I sold at an outdoor event and I'd been busting my hump preparing for this event for weeks. As is my wont, I'd built this show up into some sort of symbol, a benchmark of my artistic prowess. A hump I needed to mount and vault in order to prove to myself my inherent worth as a "maker" (a hipster term for artist/artisan which I despise).
I'd painstakingly created labels, tags a banner bearing my name and lots of new artwork to dazzle the crowd. My wish, though resources were slim, was to dazzle the looky-loos with my odd array of thematically odd artwork. I craved a sell-out show and feared phenomenal failure. The day of the event my kite-like anxiety was brought crashing down to earth on site of the parking lot and all the other peddlers unfolding their packs on wet pavement. We all were in the same boat, or more correctly parking lot puddle. As I was setting up my tent and looking at all my carefully concocted displays as though I were from Mars, I began to adjust my aspirations to a less lofty level. 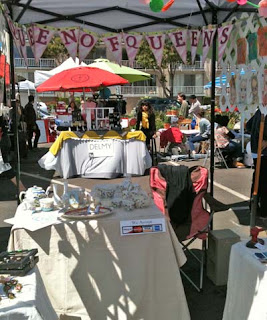 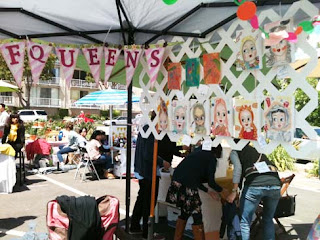 With tent erected (heh) and artwork secured, I surveyed my set-up. I was very pleased with the solutions I'd come up with to show art on the go. I was especially glad that I'd brought cinder blocks to weigh down my tent. The morning was damp and as the day wore on it became breezy - neigh, blustery, blowing unsecured umbrellas precariously close to my display. Also flying high on the breeze were many of my own art prints which eventually secured residence under my table to prevent further travels. Through it all the glory that is the Zip Tie kept my glass framed watercolors from moving so much as an inch! 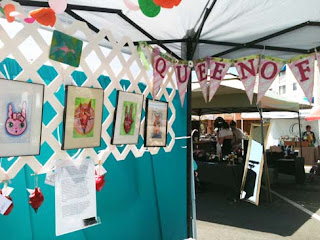 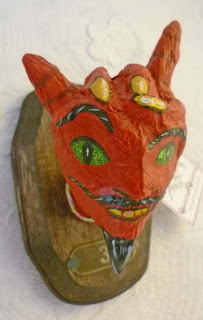 The event took place two weeks after Mother's Day, which we all know is preceded by more frantic gift and card getting than even the big "C" in December. Consequently, people were keeping a pretty tight grip on their purse strings. Although sales were slow,  I was pleased to meet new admirers and sample a savory bacon wrapped hot dog from an Argentinian food truck on site. Additionally my Lucifist wall trophy found a home as a father's day gift for some lucky father with apparently eclectic taste.
Altogether the day was successful and I'm now ready to attack the Long Beach and L.A. art walks with my passel of art. Hopefully the art walks are ready for me...
Posted by Michelley

Wow - it's great to hear that I'm not the only one who has such lofty aspirations for craft shows! lol

Good we can laugh at ourselves. Though I don't do quite enough of that. I've just been forgoing craft/art show instead :D Not really true avoidance but you know... (shrug)

Good luck at the art walks this year!